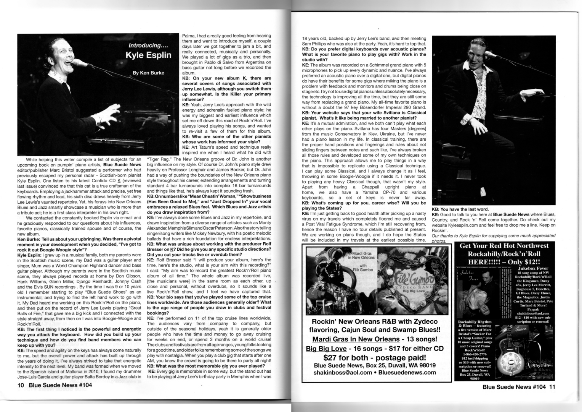 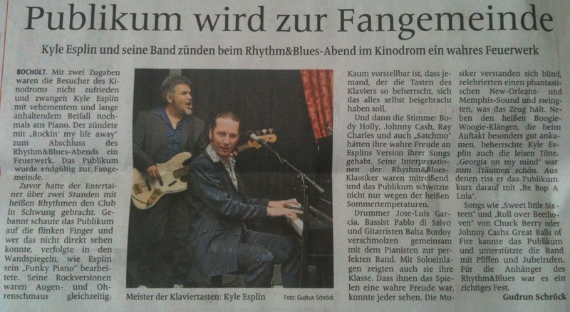 Kyle Esplin and band lit the fireworks on a Rhythm & Blues night at the Kinodrom.

Two encores weren't sufficient for the crowd as they forced Kyle Esplin at the piano one more time with their loud and long applause. He lit the fireworks with "Rocking My Life Away" as he closed the Rhythm and Blues night. By the end, the people in the audience became fans.
Just before, the entertainer had brought two hours of "spirit" to the club with that hot rhythm. Enchanted, the crowd looked at the agile fingers and those who couldn't see, saw how Esplin worked his "Funky Piano" in the wall mirror. His rock versions were a feast for both eyes and ears at the same time. Hard to believe someone who works the keys like that, taught himself how to play. And then the voice: Buddy Holly, Johnny Cash, Ray Charles and even Satchmo would have really enjoyed Esplin's versions of their songs. His interpretations of the Rhythm and blues classics were rousing and the crowd didn't just sweat because of the summer temperatures.
Drummer Jose-Luis Garcia, bass player Pablo Di Salvo and guitar player Balta Bordoy merged with the pianist into the perfect band. They showed their class acts with solo's. It was obvious to all that they enjoyed doing their work. The musicians understood each other blindly, celebrating a fantastic New Orleans and Memphis sound, swinging like mad.
Next to the hot Boogie-Woogie sounds, that in the beginning came through especially well, Kyle Esplin also mastered the soft tones, "Georgia On My Mind" was a beautiful dreamer. From which he stirred the crowd with "Be Bop A Lula". Songs like "Sweet Little 16", "Roll Over Beethoven" or Johnny Cash' "Great Balls of Fire" were known to the crowd and they supported it by whistling and shouting. For the Rhythm and Blues fan, it was a real party.