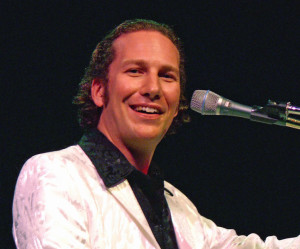 ﻿Kyle Esplin is internationally recognised as a truly great entertainer and his all-action live show is mesmerising.

Kyles theatre stage show, with up to 10 piece accompaniment, includes everything from tender Ballads, to Classical, to Rock’n’Roll, and has to be seen to be believed.

Kyle takes Boogie-Woogie piano playing to an entirely new level and he makes a piano ring like no other.

From a family of entertainers, self taught musically and professional since the age of 16, Kyle has performed on British television, music festivals across Europe, and toured theatres around the world.

Kyle has recorded 7 CDs to date, with select tracks being featured on albums such as "The Best Of British Country".

Before the night is over Kyle guarantees to have every venue Rockin' and Rollin'!